The definition of insanity is to repeat the same mistake over and over again, while hoping for a different, better outcome. Such is the latest case of the predictable Left, turning once again to another failed sociological experiment — capping or regulating rents artificially, more commonly known as “Rent Control.” Democrats in California are once again imposing rent control initiatives through state and local ballot measures, including the Sacramento Renter Protection And Community Stabilization Charter Amendment. 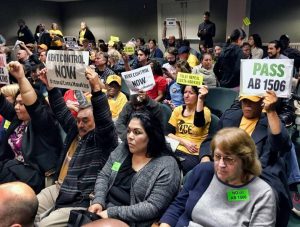 California state and local lawmakers have enacted some of the most extreme, absurd building codes, and nightmarish permitting bureaucracies processes, which only serve the government fiefdom, and ultimately restrict the amount of available housing. So rather than doing away with the excessive regulations, fees, and permitting nightmare, California government is doubling down on stupidity and re-introducing rent control policies.

Rent control and other rent regulations has artificially limited housing stock in cities across the nation. Rent control discourages new apartment and housing construction by reducing profits to the owners/builders. Yet, Democrat lawmakers seem to always turn to rent control in response to housing shortages, leading to further shortages in every city which employs it.

“Rent control, however, encourages wasteful use of space. It discriminates in favor of those who already occupy houses or apartments in a particular city or region at the expense of those who find themselves on the outside,” as the Wall Street Journal’s famous journalist Henry Hazlett explained many years ago. “Permitting rents to rise to the free market level allows all tenants or would-be tenants equal opportunity to bid for space. Under conditions of monetary inflation or real housing shortage, rents would rise just as surely if landlords were not allowed to set an asking price, but were allowed merely to accept the highest competitive bids of tenants.”

In 1995, California state lawmakers passed the Costa-Hawkins Rental Housing Act, prohibiting cities from controlling rents for any housing built after 1995 and, perhaps most critically, required cities to allow landlords to raise rents after a tenant moves out, a policy known as “vacancy decontrol.” Today however, the California Democrats are trying to repeal the Costa-Hawkins Rental Housing Act to allow cities to impose their own rent control policies once again.

Berkeley imposed strict rent control rules, prohibiting vacancy decontrol until the Costa-Hawkins Rental Housing Act abolished it. A 2013 City of Berkeley rents study found that once rent control was abolished property values soared in Berkeley, and rents, which had been stagnant, grew over 50% after adjusting for inflation. The value of Berkeley’s 19,000 rent stabilized apartments has doubled, increasing by from $1.2 to $1.5 billion.

Rent control causes the same outcomes as as other regulations and price controls: it leads to shortages. The biggest reason politicians push for rent control is they view it as a political tool, counting on constituents who will continue to elect lawmakers who support it.

As with education, the better alternative is housing vouchers for low-income assistance recipients, seniors, and college students, rather than a one-size-fits-all approach.

The Winner of the 2018 Sacramento Taxpayers Association 2018 Golden Fleece Award was The Ballot Initiative to Impose Strict Rent Control in the City of Sacramento, supported by Democratic Socialists of Sacramento, Sacramento Housing Alliance, Tenants Together and Other Travelers:  A coalition of hard Left groups are seeking to qualify for the November general election ballot a measure that would amend the City of Sacramento’s charter to impose the most draconian rent control of any in the State of California.  Coupled with a statewide initiative effort to repeal the Costa-Hawkins law which limits rent control to older units, the proposed rent control initiative in Sacramento, if approved by voters, is certain to snuff out new construction of rental properties, reduce the rental housing stock and worsen our existing housing crisis.

As Henry Hazlett explained long ago, “The housing situation will deteriorate in other ways. Most important, unless the appropriate rent increases are allowed, landlords will not trouble to remodel apartments or make other improvements in them. In fact, where rent control is particularly unrealistic or oppressive, landlords will not even keep rented houses or apartments in tolerable repair.”

Yet, this is where California’s Democrats are trying to take us once again.