California currently owes $157 billion in general obligation bond and revenue bond debt. That is more than the current estimate to build the High Speed Rail train to nowhere. This is largely because state agencies are allowed borrow billions of dollars without the public knowing about it, amounting to a blank check. 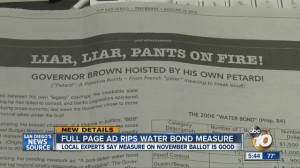 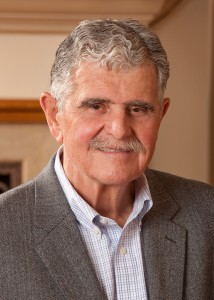 You may remember Dino Cortopassi from his series of newspaper advertisements titled “Liar Liar Pants on Fire,” in which he accused Gov. Jerry Brown and elected lawmakers of “profligate spending” while they ignored the state’s mounting long-term debt.

Cortopassi created the ads to educate everyone about California’s huge and growing debt crisis and what they can do to help fix this problem. “The facts and figures on this website come directly from the State of California and expose fiscal mismanagement by our elected leaders,” the Liar Liar website says.

Should California voters have the right to vote on state revenue bonds for major projects that cost more than $2 billion? That’s the question behind Cortopassi’s very simple initiative.

California voters must currently approve any projects funded through general-obligation bonds, debt which is backed by taxpayers. Revenue Bonds are an altogether different story. Revenue Bonds are municipal bonds that finance income-producing projects, secured by a specified revenue source supported by the revenue from a specific project, such as a toll bridge, highway or local stadium.

I talked at length with Cortopassi about the initiative, and his concerns for future generations of Californians saddled with the accumulation of debt that cannot be repaid even through future tax increases, including Gov. Jerry Brown’s plan to pay for the $15-$50 billion plan to tunnel under the Sacramento-San Joaquin River Delta proposing hefty bonds to be repaid by water users.

But what happens if Californians can’t pay the bonds back, what then? What do California residents do when there is not enough cash?

The answer is Cuts. Massive cuts, including services and retirees on public pensions.

Cortopassi said one example is the accumulated debt of Caltrans – $65 Billion of unfunded repairs and maintenance. “It’s a black hole,” he said. “By their own admission, it would take $5 to $6 Billion each year just to keep the agency’s debt from getting bigger.”

Yet Governor Jerry Brown has only allotted only $500 to $600 Million for Caltrans in his annual budget. “He’s only paying 10 percent of what’s needed to repair the state’s roads… and at the same time holds himself up as responsible?” Cortopassi asked incredulously.

The governor typically announces his annual budget grossly under what the actual spending is. In January 2016, Gov. Jerry Brown proposed a $122.6 billion budget. That was revised in May upward to a $169.3 billion state spending plan. The 2014 budget was originally $107 Billion, but ended up being $140 Billion. “How do you fund a $30 or $40 Billion shortfall?” Cortopassi asked. “Debt,” he said. “General Obligation bonds. But these are expenses, not ‘investments’ in the future as the politicians repeatedly say.”

And because Jerry Brown will not control the state agencies, which are under his control, the state has more and more unchecked debt.

And this is what Dino Cortopassi wants to put a halt to with the No Blank checks Initiative. 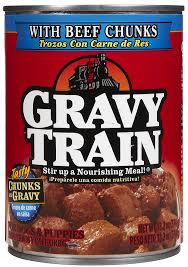 The “Sacramento Gang” is not just made up of elected legislators, but includes lobbyists, political consultants, big-government associations, unelected agency heads and commission/board appointees – the “enablers,” as Cortopassi calls them. And it is the enablers who oppose “No Blank Checks Initiative” because the initiative threatens to stop their taxpayer-funded Gravy Train.

Cortopassi said a classic example of how the “Sacramento Gang” does “bait and switch borrowing” to get around the taxing restrictions of Prop. 13, and the two-thirds votes of the Legislature under the measure, is to use the State Bond Initiative, which only requires a simple majority of voters to approve, but gives the state permission to borrow money politicians want.

The “Bait and Switch” borrowing tactics trick voters into approving bond initiatives, which Cortopassi said increased state debt by 500 percent, from $20 BILLION in 1994 to $120 BILLION in only 20 years. 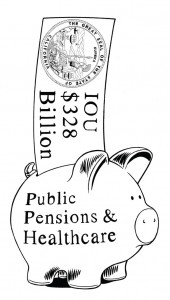 Here’s how it is done:

In “Bait and Switch” borrowing, politicians place a bond initiative on the ballot that appears to support highly popular causes, which most Californians care deeply about (like “clean water” or “highway repair”). That’s the “Bait.”

While taxpayers think they are paying for one thing, ﬁne print hidden within the initiative actually authorizes most of the BILLIONS in bond funds to be spent on dozens of other unrelated projects/agencies. That’s the “Switch.”

Cortopassi said the 2006 Water Bond Proposition 84 raised $5.4 BILLION in funds. But less than half of bond funds actually went to water agencies. Instead, hidden ﬁne print within the initiative, authorized $3 BILLION in unrelated “internal/external pork” spending.

Dino Cortopassi is very concerned about when the state runs out of cash. “The people will be cut first,” he said: “the aged, retirees, those who can’t take care of themselves, and have no political clout. Even recent retirees – they are powerless. And the state currently can’t pay its unfunded liabilities,” Cortopassi added.

“Gov. Jerry Brown is a political magician; what he and the spendthrift Legislators have done managerially with the state is horrid. And the short-sighted labor unions, the ‘porker consultants’ – a coterie very large – have debt addiction.”

“My initiative will force future projects to be efficiently planned. And they’ll only get one bite of the apple,” added Cortopassi. “The people are being led to slaughter – that’s what I care about.”